Ukrainian software developers are in demand and one of the programs that they are hired for is Ruby on Rail. The program has been used for the creation of new apps and mobile sites for businesses. There are many individuals who take the position of a Ruby on Rail developer. Ruby on Rails outsourcing, therefore, is a thing you could consider for your business if you need to develop mobile sites and new apps.

A Brief Overview of Ruby on Rails Development

Ruby on Rails (RoR) is a popular open-source web application framework consisting of a collection of code, tools and utilities. This framework is written in the programming language Ruby under the MIT License. Rails is a model–view–controller (MVC) framework that can assist businesses to build applications, specifically websites, from simple to complex. Many businesses around the world are using offshore RoR development for its ease of use, cost-effectiveness and security strength. Notable companies that hire Ruby on Rails developer offshore candidates successfully include Github, Shopify, Kickstarter, Scribd, Instacart, Zendesk and SoundCloud. These companies are mainly using RoR for web development purposes. Let’s consider the benefits involved in finding Ruby on Rails developers for hire. 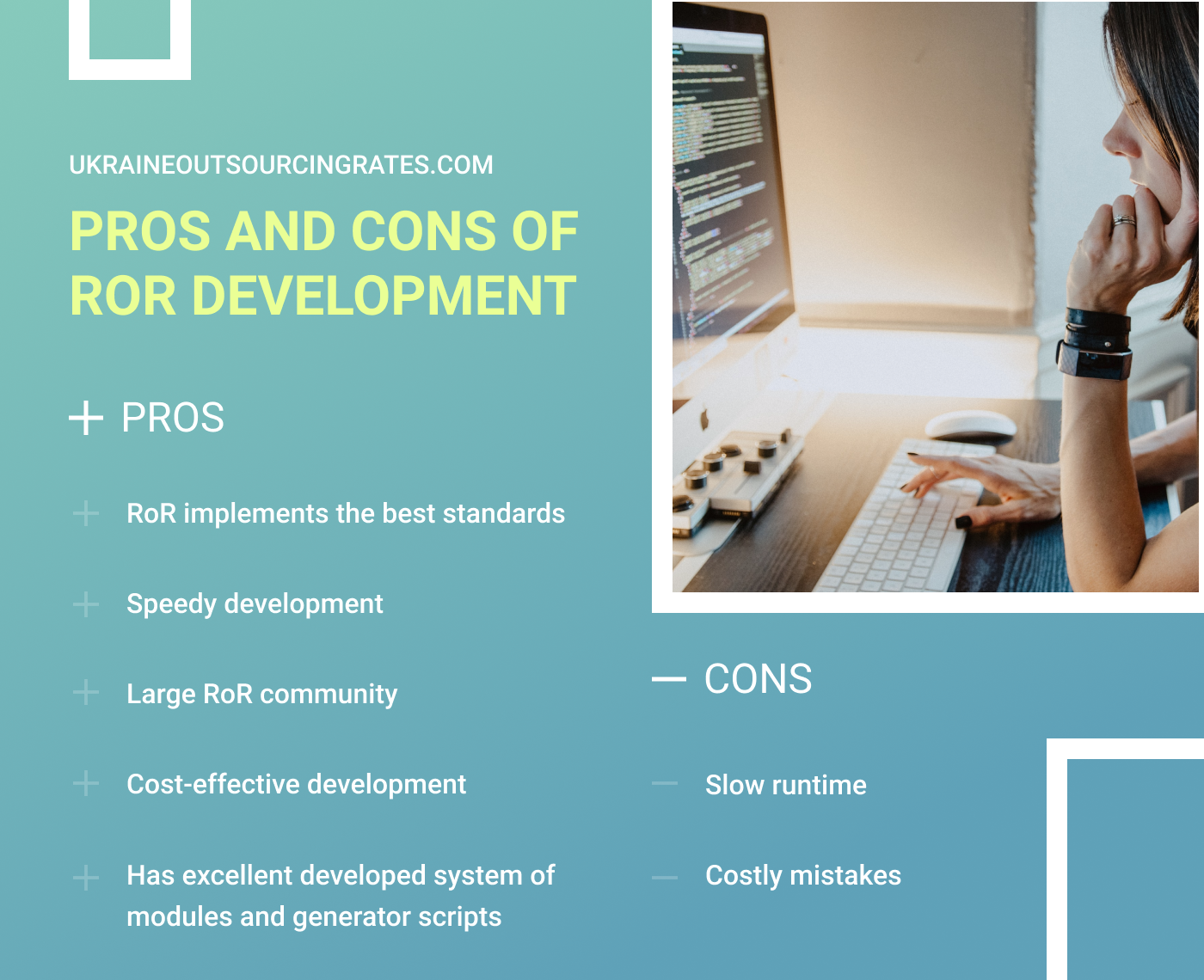 Benefits you’ll get with RoR development:

As with any development framework, RoR also has a few pitfalls. This should be considered before implementing RoR for development. Let’s view these downfalls:

The cons of using RoR developers:

What Ruby on Rails Developers for Hire Do

Over the last few years, RoR has gained a lot of popularity. Let’s consider a few RoR statistics:

Companies that want to develop robust applications, should consider hiring offshore Ruby on Rails developers. Their experience with RoR and other common libraries positions them well to guide the application development project from start to finish. Their understanding of object-oriented programming and server-side templating languages also allows them to overcome issues fast and efficiently, while their knowledge of security allows them to build a highly secure product.

The Average Salary for Ruby on Rails Developer Candidates

Ruby on Rails developer rates can range from country to country. Therefore, it is important to do proper research first before deciding to hire from a specific region. Let’s consider the average annual RoR developer salary in five major countries: 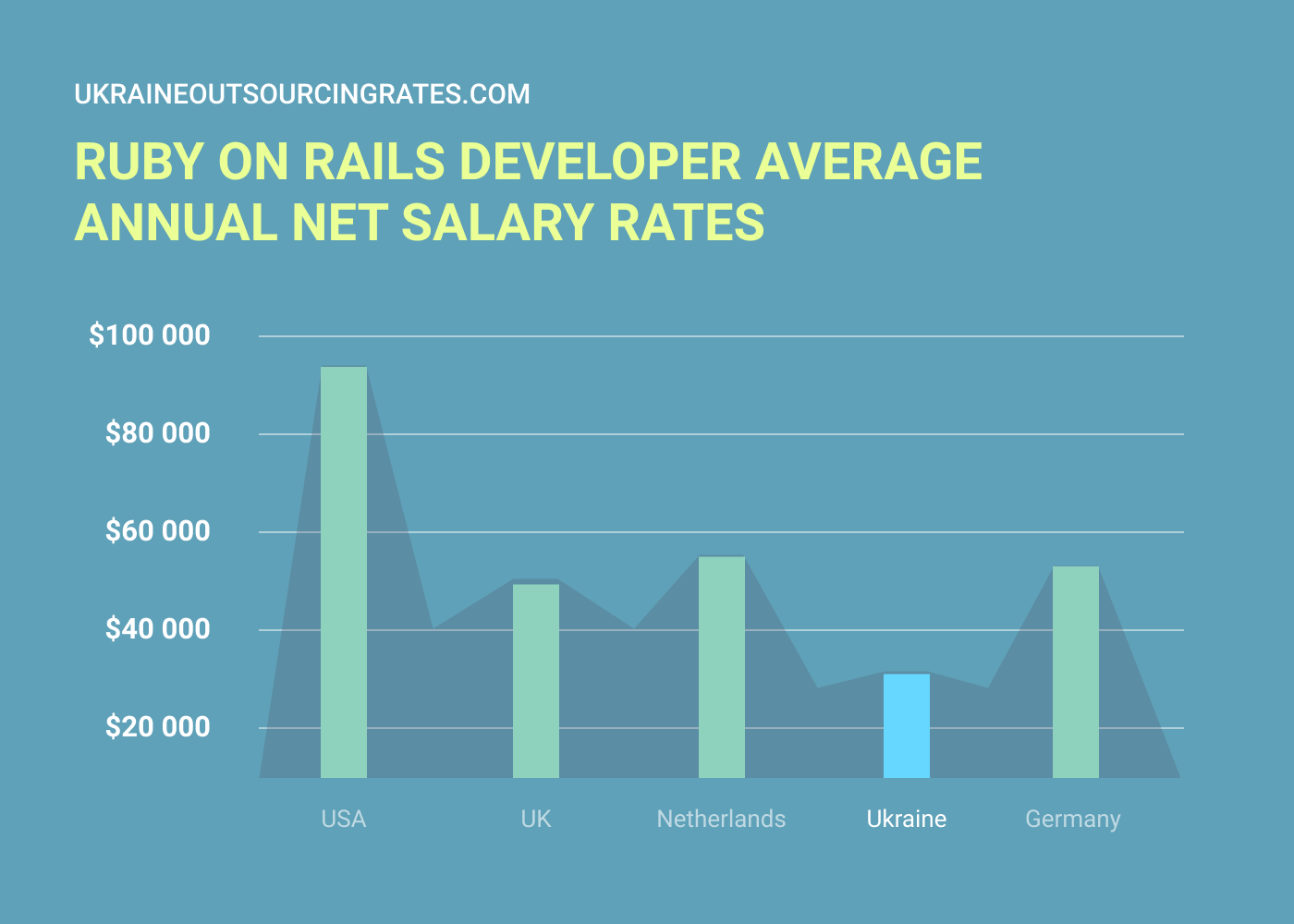 Ruby on Rails Programmer Cost Per Hour in Ukraine 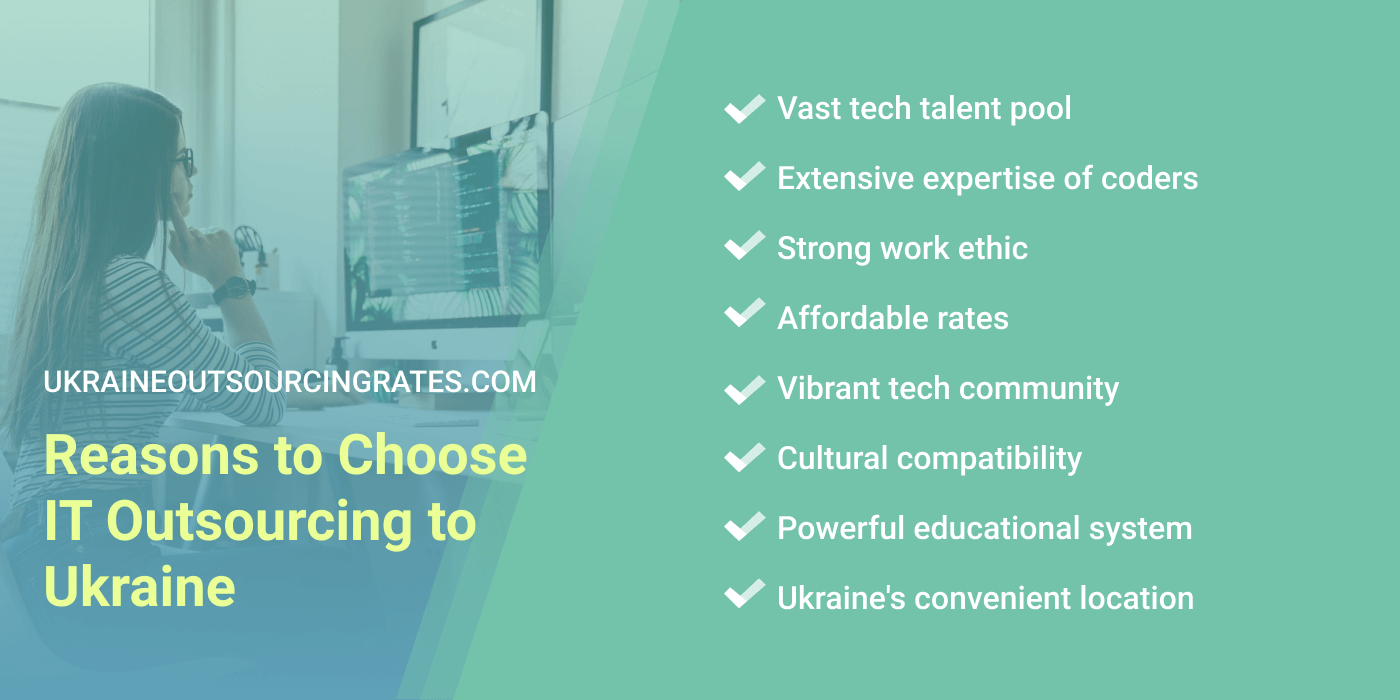 What to Consider When Searching for Offshore Ruby on Rails Developers

When deciding to hire any IT expert there are certain things to consider. The same applies when hiring an RoR programmer as a freelancer or from a Ruby on Rails company in Ukraine. The aspects that should be carefully considered before hiring include:

Once you can confirm all of the above points and you are happy with the results, it is safe to outsource Ruby on Rails candidate. It is always wise to ask for a resume, a cover letter, references, a test and an interview.

When you have considered all aspects of hiring Ruby on Rails developers Ukraine and you are confident that your businesses need one, it is time to find the ideal candidate. There are many ways to hire an RoR developer in Ukraine, including using freelancing platforms and hire RoR development company. Let’s consider the main methods:

Millions of freelancers around the world use a variety of online platforms to advertise their skill and to gain new clients. Freelancers are mostly highly affordable, however, it is often difficult to find a candidate with sufficient experience and skill.

There are plenty of job listing websites available online where you could post a job description. While you may find great candidates, the process is often lengthy. It can take months to hire the right person!

Hiring from an outstaffing company

The safest way to find the best talent is by using a Ruby on Rails outsourcing company. These companies carefully source highly skilled and experienced candidates and prepare them to work with international clients, big and small. With an outstaffing RoR development company, you can be sure that all your needs will be met.

In Ukraine, developers have an average salary of $2,000, but it varies depending on skill level: Junior, Middle or Senior developer. In the United States, the average salary is typically more than $70,000 every year. Europe has the most likely same average salary for its developers, but it depends on the location, status, and size of the company (Source). 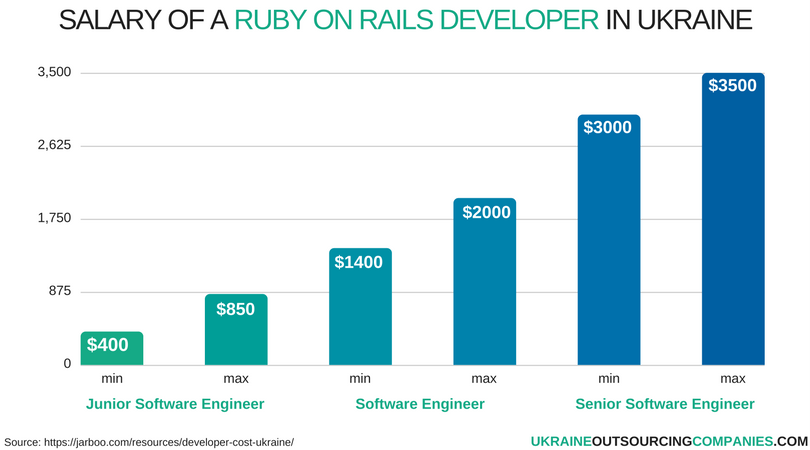 Compare their rates, experience, and location. Also, you may want to contact each of your shortlisted firms to discuss your needs and figure out if they can provide you with such a service based on your requirements.

Thinking about hiring a Python developer Ukraine? If yes, visit this page!

Why Hire Ruby on Rails Developers in Ukraine

There you have what to know about outsourcing IT Ukraine, ruby on rails market in Ukraine and how to hire one in the country. You can consider these professionals for their high level of technical skills, proficiency and cost savings for you.